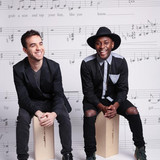 ABOUT ETHAN D. PAKCHAR Ethan D. Pakchar is a New York City based composer and guitarist. He is half of the writing team “Lyons & Pakchar” who were recently commissioned by Seattle's 5th Ave Theatre. Their show Five Points received its world premiere in Minneapolis in April 2018. As a guitarist, Ethan has played for Sara Bareilles, Billy Porter, Cynthia Erivo, the Radio City Orchestra, the house band of the Apollo Theater, and the Broadway productions of Hamilton, Wicked, Book of Mormon, The Lion King, and Dear Evan Hansen.