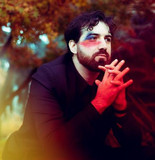 Born in 1988, Alberto Cipolla started developing an interest for music since his childhood. Alberto continued his musical education and he graduated in Music Composition at the “Giuseppe Verdi” conservatoire in Turin, where he is also currently attending his last school year in Orchestral Conducting. Furthermore, he got a degree in Music Production at the APM School in Saluzzo (CN), and he attended a two-year course in Contemporary Writing and Technology at the CPM Music Institute in Milan. In recent years, he has written, arranged and produced music for national italian TV shows, advertisements and art exhibititions, along with soundtracks for short animated film and for movies and documentaries. His first album, Soundtrack for the Movies in Your Head (edited by VideoRadio and distributed by SELF, was released on 26th October 2014. The thirteen tracks of the album, which received rave reviews from the critics, feature the artist’s composition skills at their finest. OndaRock has described the songs as “little treasure chests of emotion” which “openly play with the most instinctive elements of artistic expression”. His second album, produced by Raffaele D’Anello for the record label MeatBeat, is coming out in 2018. Alberto’s new work, focused on the themes of choice/chance and on human relationships, is marked by a unique sound, inspired by artists such as Chet Faker/Nick Murphy, Woodkid and Anhoni, in which electronic and classical music is mixed with downtempo.