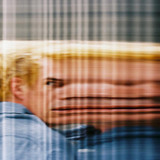 A restlessly experimental act that never makes the same album twice, during the 2000s and 2010s, Liars evolved from arty dance-punks into a project that transcended genres with every transformation. As they moved from place to place and sound to sound, they swung between vulnerability and aggression on each album and sometimes within the course of a single song. Their time in Berlin ranged from the insular percussion experiments of 2006's Drum's Not Dead to the postmodern biker rock of 2007's Liars. During their stint in Los Angeles, they celebrated the city's misfits on 2010's alternately claustrophobic and stark Sisterworld and explored emotional confusion with delicate electronics and dream pop on 2012's WIXIW. No matter how their sound changed, their music exuded a sense of mystery and searching that was only heightened on 2017's TFCF, Liars' first album with singer, songwriter, and multi-instrumentalist Angus Andrew as the project's sole member. Liars' roots stretch back to late '90s Los Angeles, where Andrew, an Australian photography student at Cal Arts, met songwriter/multi-instrumentalist Aaron Hemphill, a former microbiology student working at a local record store. The pair began working on 4-track recordings soon after, then moved to New York City. It was there that they responded to a musicians wanted ad placed by bassist Pat Noecker, who'd previously played with Urethra Franklin and Neuromancer, and drummer Ron Albertson, a former member of Mercy Rule. By November 2000, the band was officially christened Liars. Working with Beastie Boys and Lee "Scratch" Perry producer/engineer Steve Revitte, they recorded their debut album They Threw Us All in a Trench and Stuck a Monument on Top in just two days. Upon its October 2001 release via Gern Blandsten, the album's energetic dance-punk helped make a name for the band in New York's burgeoning early-2000s indie rock scene. The band signed to Mute Records, which released the EP Fins to Make Us More Fish-Like in July 2002 and reissued They Threw Us All in a Trench that September. After the release of the demos EP We No Longer Knew Who We Were, Noecker and Albertson left the band. The remaining half of Liars recruited Andrew's former Cal Arts classmate Julian Gross as drummer. The band debuted as a trio with Atheists, Reconsider, a split EP with Oneida that appeared in December 2002 on Arena Rock Recording Co. The EP's experimental collages hinted at the more challenging direction Liars took on their second album and first for Mute, 2004's They Were Wrong, So We Drowned. Recorded in a cabin in the forests of New Jersey with friend and co-producer Dave Sitek, it was inspired by experimental electronic music and German legends about witchcraft. Liars then moved to Berlin and began work on their third album in an East German broadcast center. Their percussion experiments formed the backbone of 2006's Drum's Not Dead, a concept album revolving around creativity and doubt accompanied by short films by the band and other filmmakers. On the following year's self-titled album, Liars took a more stripped-down approach with more structured songwriting and a harder-edged sound. Liars relocated to L.A. and took inspiration from the city's loners and outsiders for 2010's Sisterworld, which mixed high-concept atmospherics with blistering outbursts and featured contributions from Jon Brion collaborator Tom Biller. That year, Liars also joined Beck's Record Club project and covered INXS' 1987 album Kick. To record their next album, the band wrote material in a cabin north of L.A. and worked with Mute founder Daniel Miller in their private studio. The result was 2012's WIXIW (pronounced "wish you"), an introspective, relationship-focused set of songs draped in soft electronics that drew comparisons to their previous tourmates Radiohead. The band did another about-face on the brash, industrial-tinged Mess, which arrived in March 2014. After that album's release, Gross left the band due to health issues that made touring and performing difficult, and Hemphill departed Liars amicably at the beginning of 2017. Andrew, the project's sole remaining member, relocated to a remote part of his native Australia, where he wrote songs that incorporated field recordings, acoustic guitar, and lyrics inspired by Hemphill's departure and the death of his father. Those songs became TFCF (short for "Theme from Crying Fountain"), which arrived in August 2017. Following the remix EP VFCF (Variations from Crying Fountain) in early 2018, that July saw the release of Liars' score to director Jeremy Phillips' coming-of-age film 1/1, which Andrew and Hemphill recorded in 2014 shortly after creating Mess. ~ Heather Phares, Rovi