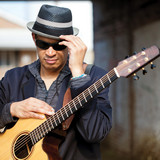 Raul Midón is a Grammy-nominated contemporary singer/songwriter whose impassioned acoustic guitar playing -- which traverses pop, jazz, soul, urban, cumbia, and flamenco -- has garnered as much attention as his smooth singing and sophisticated writing. Blind since birth, Midón's breezy style has endeared him to jazz and pop audiences on both sides of the Atlantic and Pacific Oceans. His sweet, silky tenor delivery and poignant, emotional phrasing have been influenced by everyone from Bill Withers and Michael Franks to Donny Hathaway and D'Angelo. Though he began his career as a backing vocalist for Shakira, Alejandro Sanz, and Julio Iglesias, Midón made some bones as a singer with DJ/producer Little Louie Vega's Elements of Life Orchestra. He was signed by Arif Mardin to Manhattan Records as solo artist in 2005 and issued the Top 200 debut offering State of Mind in 2005. 2010's Synthesis for Decca was produced by Larry Klein. It introduced Midón to top-flight jazz musicians including Dean Parks, Larry Goldings, Paulinho Da Costa, and Vinnie Colaiuta. Despite a rigorous touring schedule, he has accumulated a body of carefully curated work for various labels. Midón's greatest industry notice occurred with 2016's Bad Ass and Blind and 2018's If You Really Want, with the Metropole Orkest conducted by Vince Mendoza, earning him back-to-back Grammy nominations for Best Vocal Jazz Album. Midón was born in Embudo, New Mexico, to an Argentine father and American mother. He began playing drums in early childhood before switching to guitar, taking in flamenco, jazz, and classical studies on his chosen instrument. In the '90s, he attended college in Miami and established himself as a background vocalist in Latin pop recording sessions. Midón was a remarkable talent even then, and word quickly spread of his stature as a singer and guitarist. Though moonlighting in Latin pop, his own music drew inspiration from artists as diverse as Hermeto Pascoal, Bill Withers, and Joni Mitchell. As a solo artist, Midón made his debut on RCA with Gracias a la Vida (1999), after which he relocated to New York, where he focused on a solo career. Following the independent release Blind to Reality (2001), he was signed to the EMI-distributed Manhattan label by producer/composer Arif Mardin (his first signing in a 50-year career) and released the charting State of Mind in 2005 and World Within a World in 2007. The former featured appearances by Stevie Wonder and Jason Mraz and cracked the Billboard 200 chart. A short stint with Decca produced the Larry Klein-helmed Synthesis (2010), highlighted by a cover of the Beatles' "Blackbird. The same year he was a featured guest on Marcus Miller's A Night in Monte Carlo with the L'Orchestre Philharmonique de Monte Carlo. The three cuts he appeared on -- "State of Mind," the Brazilian medley "O Mio Babbino Caro/Mas Que Nada," and "Amazing Grace" -- were largely responsible for the album's entry inside the Top 10 on the Contemporary Jazz Charts. Midón followed with his own self-released live offering, Invisible Chains: Live from NYC (2012); it preceded an association with Mack Avenue subsidiary Artistry for Don't Hesitate (2014) and the charting Bad Ass and Blind in 2017, which peaked at number five on the Jazz Albums charts and garnered him a Grammy nomination for Best Jazz Vocal Album. The following year, 2018 Mack Avenue issued If You Really Want, with Vince Mendoza conducting the Metropole Orkest. Though it didn't chart Stateside, it registered on the jazz lists in Europe and netted Midón a second Grammy Nomination in the Best Vocal Jazz Album category. Midón also performed a widely acclaimed NPR Tiny Desk Concert that year. After touring the U.S. and Europe, he re-entered the studio. In March of 2020, Midón saw Mirror released by Mack Avenue. Not content to remain in the jazz lane for a third album, he returned to his genre crossing ways. He enlisted the Manhattan Transfer's Janis Siegel to assist him on the Latin-inflected groover "I Love the Afternoon" and Gerald Clayton co-wrote the jazz-folk fusion number "Deep Dry Ocean." "You're the One" wove together funk, hip-hop, and flamenco. Vibraphonist Joe Locke assisted on the lilting pop song "A Certain Cafe," while the title track offered a sultry, Santana-influenced Latin rock vibe. For the first time, Midón included a pair of spoken word selections in "If I Could See" and "A Day Without War." ~ Wade Kergan & Andy Kellman