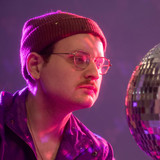 Micah E. Wood is a Baltimore based producer, photographer, and recording artist who's genre-blending sound falls in between the lines of pop, soul, and alternative rock. Working as a full-circle artist, his love of both visual and audio structures have dominated his extracurricular time. After publishing "Features," a photo book showcasing portraits with some of the hottest artists in Baltimore, Wood shifted his focus back toward the creation of music. In May of 2019, he released his new self-titled album, his most personal and sonically expansive record to date. Micah's new EP 'YOU ARE HERE' comes out at the end of the year. In addition to releasing his own solo music, Wood has spent time writing songs with Outcalls, Bobbi Rush, Butch Dawson, Peach Face, Modern Nomad, Dyyo, Ari Pluznik, and more.