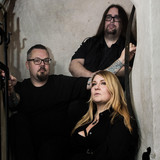 The Darkest Side of Me

The Darkest Side of Me is a gothic doom metal band from Oxelösund, a small town on the Swedish east coast. The line-up consists of Jocke Fasth (composer, guitarist, bass player and producer), Danne Johansson (singer, songwriter and recording technician) and Åsa Camara (singer and songwriter). The members are composing mid-tempo songs consisting of strong both male and female harmonies accompanied by prominent, melodic guitar lines. The band was founded in mars 2019 by Jocke as a studio project. He had previously played punk, grunge and rock in different constellations. After building a studio at home Jocke decided to go in the direction om gothic metal, influenced by doom. - For me it was natural to get Danne on vocals when I started the project, because we were already playing together in another band where the music didn’t progress as we wanted. Under this line-up The Darkest Side of Me wrote and recorded their first EP, Dark Horizon (released January 31th, 2020). At the time Danne was the only singer of the band. They had both for some time been wanting to add a female voice to their sound, and therefore asked local singer Åsa to feature on one of the songs. After Unknown was recorded, the guys decided to ask Åsa if she wanted to be a permanent part of the band and she joined them in early January 2020.