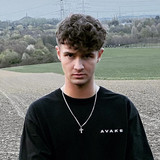 hi, I'm happy you're here :)   MAKE SURE TO HIT FOLLOW TO GET UPDATES ON NEW MUSIC! ⚡️   For AVAKE, music is something that transcends language and is a force bigger than we could ever comprehend. It's capable of transporting us from one dimension into the next. AVAKE, also known as Daniel, is a german, 22-year-old electronic music producer. His signature emotional music encapsulates the vision to relate to a storyline, connect listeners and accompany them on their journey that envelopes them. Music lessons were never his thing: No matter if piano, guitar, or other: He wanted to create something whole. At the age of nine, he tried his first ever bought DAW - Magix Music Maker - but he was too young to understand, what he was doing: Mixtapes were the only things created. The ground-breaking moment was 2017 at the age of 18: A known singer joked around and said, that he should produce a song she will sing for. That was the moment where the burden passion became alive. Today, the self-taught music producer focuses on exploring his talent in electro-pop music and creating music that tells a personal story. The intention behind his music is to take the listeners on a journey with electronic music.