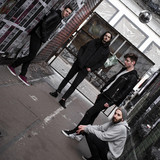 In a fast-paced world, the music of ABANDONED IN DESTINY focuses the core of the inner self and stands for trusting one's own feelings and tensions even in the darkest hour. Problems, worries and hopes are reflected in their energetic songs, which above all convey the message “You are good the way you are, believe in yourself!” In difficult life situations, the music of Abandoned In Destiny should give you consolation and support and the courage listen to your inner compass.   The band's second EP, which will be released in July 2021, pursues this path with the combined forces of four songs. Each of them deals with the topic on how to find your way of dealing with Issues and values in a world that changes as fast as ours.   After the release of the first EP "New Era", Abandoned In Destiny went on an extensive live tour, which reached its peak at festival "Rock im Allerpark" as support act of the band Razz. After extensive work in their Songwriting the band recorded their second EP with Producer Christoph Wieczorek at Sawdust Recordings.