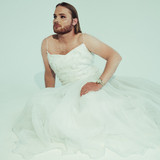 At the time of the release of his cult mix tape Leipie van het plein, Donnie was seen as a protégé of the legendary Dutch hiphop crew De Jeugd Van Tegenwoordig. His Dutch delivery and ingenious wordplay might have similarities and sure enough De Jeugd producer Bas Bron helped by adding deep electro funk to his sound, but ‘Maradonnie’ has claimed his own crown and his reputation is rapidly spreading from Amsterdam. His debut album Mannelogie was one of the hiphop releases of 2015 and follow-up Loei Ordinair takes his sound one step further. In 2017 Donnie released a new full-length album, titled BFMJT, which is again fully produced by Bas Bron.