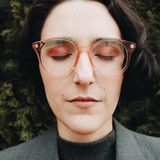 Isa Scheufler is a Brazilian singer-songwriter, ukulele and acoustic guitar player. As a teenager, she and some friends started a rock band called Rita Lina - she was the lead singer. The group lasted for a couple of years, but helped Isa to improve her creative processes. She moved to Rio de Janeiro in 2008, where she became a Social Worker and got a master degree in Public Health. In 2017, Isa moved again, this time to Brooklyn, where she rediscovered her love for music during a sabbatical year. The creative atmosphere of NYC seemed perfect for someone trying to find herself, and so Isa learned how to play the uke and started to write songs. The outcome of that process is her debut album, Oficina. Sang in English and Portuguese, the songs are a mix of rock, folk and Brazilian elements. Isa still lives in Brooklyn, where she studies gestalt therapy while still writing songs.