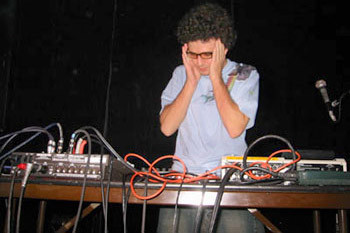 Books on Tape is the long-running solo project of electronic musician Todd Drootin. Drootin began Books on Tape in Los Angeles in 1999 after the breakup of his more collaborative project Subverse. An early cousin of breakcore and more punk-informed takes on electronic music, Drootin dubbed his often caustic Books on Tape compositions "beatpunk" and amassed a huge selection of demos, early experiments, and other recordings for several years. Throw Down Your Laptops, his first widely available album, was released in 2002. Follow-up album Books on Tape Sings the Blues arrived in 2003, and Drootin began a stopgap touring schedule that would keep him on the road on and off for the next several years as his fan base grew, particularly in Canada. Late 2004 saw the release of an extensive EP entitled The Business End, which was followed in 2005 by proper album Dinosaur Dinosaur. More touring ensued, and in 2006 a collection of rarities, oddities, and remixes was released in the form of Who Shot Ya? (Remixes + Rarities). Things were relatively quiet in the years that followed, with Books on Tape sinking into hiatus until the four-song online-only EP Still Ride appeared suddenly in 2011. The incredibly brief EP preceded a spurt of reactivation for the project, with Drootin uploading obscure releases for free listening online throughout 2011 and 2012, as well as returning to work on a previously shelved album from 2006. Said album became Retired Numbers, and was released in a limited vinyl run as well as in the form of a digital download in late 2012. ~ Fred Thomas, Rovi