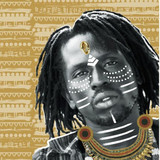 Emmanuel started his life as a child soldier in the war-torn region of Southern Sudan. He was eventually rescued by a British aid worker, Emma McCune and smuggled to Kenya where he overcame a huge number of struggles to become an acclaimed recording artist and peace activist. He now lives in Toronto, Canada. Emmanuel has released six award nominated studio albums: Naath The Key, Gua, Ceasefire, Warchild and See Me Mama. Naath, released in

2018 is an infectious afrobeats infused album and a stunning collaboration with his highly talented sister Nyaruach. Emmanuel's music draws strongly on his unique experiences and the sounds of his country. His recent music (and its subsequent remixes) interweaves traditional folklore and love songs - alongside infectious dance tunes. Jal's music both reflects