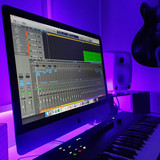 Storch Blaize, is a performer, DJ, song writer and a record producer. As a performer he’s opened shows for Boyz II Men, Akon and Model of the Universe. He has collaborated with numerous other Grammy award winning and nominated recording artists including Jackie Boyz, Jimmy Burney, David Ward and Rayvon. His emotive musical selections are his own therapy.

Having grown up on his uncle’s 90s and early 2000s Hip Hip and Dancehall combination of RnB music collection, Storch Blaize ended up with quite a mixed spectrum of musical influence. This translates into sets where he infuses together all the pieces of this music that he loves best: beautiful synth work, ethereal backdrops and occasional vocal hooks… all on top of a pronounced foot-shuffling party beats. Though Storch Blaize loves playing globally in nightclubs and special events, his love for music goes beyond the spectrum of mixing tunes.