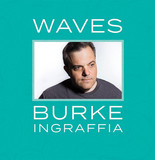 Burke Ingraffia is a singer/songwriter whose folk and jazz songs have been compared to those of Mose Allison, Michael Franks, Bob Dorough, and James Taylor. His clear and pleasant voice adds a touch of honesty to his hopeful and witty lyrics. “The American South overflows with the riches of regional music, the product of centuries of cross-cultural pollination. It is the rare musician who can transform these musical resources into art that speaks to the world at large. New Orleans native Burke Ingraffia is one of them, with a lyrical gift that can call to mind Mose Allison, Hoagy Carmichael or Allen Toussaint, with an added touch of sly humor. His songs are a delight for the ear, the mind and the soul.” ~ Multi-Grammy Award Winning Producer Scott Billington “So much music these days tries to be either cool or ironic or transgressive or morose that we think a lot of us listen to music expecting some sort of formidable-ness. Ingraffia’s music, by contrast, disarms our expectations, gives us something kinder, more sincere and playful” ~ Image Journal