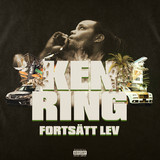 Ken Ring is a pioneering Swedish rapper who made his album debut in 1999 with Vägen Tillbaka and released the Top Ten hit album Hip Hop a decade later. Born on January 29, 1979, in Kenya, he was raised in the Hässelby region of Stockholm, Sweden. After making his recording debut on the mixtape scene during the late '90s, Ring made his full-length solo debut in 1999 with Vägen Tillbaka on EMI, followed by the albums Mitt Hem Blir Ditt Hem (2000), Mellanspelet (2002), InblicKEN (2003), and Det Bortglömda (2003). In 2004 he teamed up with Norwegian rap trailblazer Tommy Tee for the collaborative album 2 Legender Utan Penger, which was a Top 40 hit in Norway and spawned the singles "BB Berättelsen" and "Måste Seja Hei." Subsequent solo albums by Ring include Kennelklubben (2004), RubriKEN (2005), and Äntligen Hemma (2007). Among his most successful releases to date was Hip Hop (2009), the front-cover art of which is an homage to Nas' classic Illmatic (1994). Released in association with Universal Music, Hip Hop was a Top Ten hit on the Swedish albums chart. In addition to his album output and a long list of singles and EPs, Ring released albums well into the 2010s. ~ Jason Birchmeier, Rovi