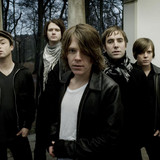 Hailing from Stockholm Sweden the band released their debut album ‘White Days’ in 2005. They toured the UK and Europe to support it picking up tastemakers such as DJ Pelle Moeld on Swedish National Radio and a host of fans along the way. Recording for their second album ‘Firesoul' began in Gothenburg's 'Svenska Grammofon Studion' with 'The Soundtrack Of Our Lives' Kalle G and the BAD CA$H brothers Jonas & Kalle producing. Whilst recording, the band took time out to tour the UK and Europe again. The band then continued with the album recording in their own studio in Stockholm and released ‘Firesoul’ in 2009. They continued to play live and released three singles from the album. The artwork for the album and singles is by Swedish artist Håkan Ängquist.