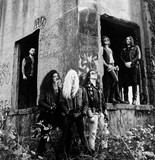 Silver Talon rose from the ashes of Portland metal group Spellcaster, who disbanded in 2017. Guitarists Bryce VanHoosen & Sebastian Silva teamed up & managed to breathe new life into the project right away. Their chemistry was undeniable from the get-go, & they sealed the deal with the addition of vocalist Wyatt Howell, who helped Silver Talon further focus their identity & sound. By late 2018, the band had several songs under its belt, & it didn’t take long for the group to release a well-received debut EP, “Becoming A Demon.” The release managed to capture the band’s uncompromising & raw-edged sound with a selection of five original songs. There was even room for a collaboration with Jeff Loomis (Arch Enemy / Nevermore) who blazed through a killer guitar solo for an additional cover of Sanctuary’s cult classic “Battle Angels.” With a few line-up changes, & Sebastian Silva struggling with visa issues, the band had a tumultuous 2019. However, they managed to spin the odds in their favor, adding guitarist Devon Miller, bassist Walter Hartzell, & drummer Michael Thompson, & embracing a 6-piece line up with three guitarists, giving the band unprecedented power & versatility. Although 2020 has also been a rather grim year, the combo managed to stay focused & productive. They released a single titled “Deceiver, I Am” in early December. With 3 guitarists on tap, the arrangements are deeper & more dimensional, allowing the band to focus on layering their music.