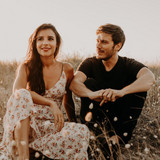 Racoon Racoon is a chamber folk duo from France formed by Léa and Léonard. The ten-year couple began to compose together when living in Belgium, in 2016 and soon released a first EP Our Love's Funeral in February 2017 on the German label Majestic Records. Early 2018, they released their second EP Dawn Chorus, written in the heart of the Italian Alps. They recorded it in Belgium with talented musicians from Brussels' Philharmonic orchestra Thomas Fiorini (double bass) and Emile Verstraeten (violins and mandolin) that Léo met while working as a set-up engineer on a recording of Ramin Djawadi. Late 2020, they released their third EP A Birds Story written in Italy and Spain, and recorded in France and Belgium with the same musicians. A collection of folk songs, through which they express love, anger, and grief in a more mature and delicate way.   “Racoon Racoon have slowly been making their name known. Their debut EP, Our Love’s Funeral, arrived in 2016 and set in motion one of the most promising folk acts today.” Jason Scott / American Songwriter   Their raw and intimate atmosphere is influenced by artists like Damien Rice, The Milk Carton Kids or Mandolin Orange.