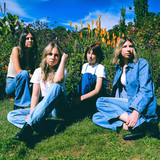 From practicing in their family shed as teenagers in rural Australia, to touring the world, it’s been a strange trip for the four Findlay sisters. As Stonefield, they’ve got three albums and thousands of miles under their belts, plus plenty of perspective on what it’s like to fight to make a place for themselves, and tell their own story. Written largely on the road in America earlier this year, the songs on BENT are filled with reference and reflection--the kind that comes from months spent far from home, living on four wheels. “It’s a culmination of experiences, emotions, and stories collected over time,” explains lead singer and drummer Amy Findlay, “A growth of honest, raw, energy that has been burning within us and waiting for its moment.” Recorded in just five days with Joe Walker and Stu Mackenzie from King Gizzard, the album is almost 100% live. Besides being an impressive feat and the flexing of a confident band operating at the height of their powers, that immediacy lends the album a distinct, crackling energy--thunder, lightning, and muscle-bound horsepower. The sonic inspiration taken from listening to Black Sabbath, Beak, Deep Purple, The Alan Parsons Project, and Mike Oldfield inject BENT with its sternum-shaking heaviness and ever-present swagger, but also its exploratory fearlessness--letting the songs loose to twist and turn, sticking to no one’s rules but their own.