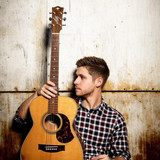 Collin Hill is a 23 year old Fingerstyle guitarist based in Nashville TN. He grew up in southern California first learning to play the violin at a young age. Later, he picked up the guitar which after a few years truly became his passion. At age 16, he found artists like Tommy Emmanuel, Chet Atkins, Jack Pearson, Sungha Jung, Emil Ernebro and many more who have influenced his playing.

He is now focused on arranging songs and writing his own music.