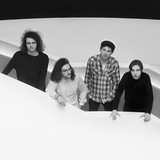 Catfish and the Bottlemen

Featuring Catfish and the Bottlemen

Catfish and the Bottlemen are practically of “no fixed abode” due to near constant touring and recording since 2014, when their platinum-certified debut album The Balcony surfaced. Preparing fans for a raft of new material to follow their 2016 gold-certified album The Ride, the band is led out of the studio and onto even bigger stages by venerated frontman and songwriter, Van McCann, along with Johnny Bond (lead guitar), Benji Blakeway (bass), and Bob Hall (drums). Their eagerly anticipated 2019 live announcements come following a triumphant summer that saw them command headline slots across several major UK festivals, and break new ground internationally appearing at top festivals in Italy, Spain, France, and the United States. The past eighteen months has seen the band claim their place as a bona fide arena band at home, adding an already sold-out UK arena tour in February 2019 to an impressive list of previously conquered stages. They are also finding time to revisit Australia for the third time in two years when they kick off a national tour in Tasmania at the end of 2018. Audiences from Manchester to Melbourne, London to Los Angeles, Newcastle to New York, and everywhere in between have been engulfed by the swell of eager sentiment propelled from a vociferous fanbase. Catfish and the Bottlemen possess a magnetic and dynamic focal point in McCann, renowned for posing everyday, easily-identifiable observations through his lyrics.