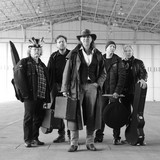 In the late nineties Jan-Willem and Fred met at a New Years party at Café Dekker in Nieuw Bergen and talked about their mutual passion for making and creating music. The seed was planted, an idea was born and soon there was a new band in town. Gunnar (who left the band in 2003) and Ruud - the drummer boy - joined in quickly and the original line-up became complete when Joris picked up the bass. In 2005 the band &gt;SOLD&lt; released their first studio album ‘For Sale’ and in 2009 the second album ‘People Talking’ came out. Joris left &gt;SOLD&lt; in 2011 and the band was desperate for a new bass player. So Jeroen, actually a guitar man, tried his best to convert into a bass. In the meanwhile John applied for the job and the decision was easy: Jeroen was added for his good looks and guitar licks, while John turned out to be the ugliest best bass player the band could wish for. The repertoire was increased with lots of new material, of which their latest album ‘On the Move’ was released in 2016, more vocal harmony and musical development but still undeniably Sold.<!-- http://www.soldonline.nl https://www.facebook.com/bandsold -->