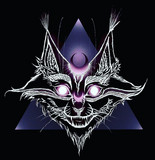 With surreal lyrics, an energetic, very unique singer, and an addictive sound that combines progressive stoner rock with doom, folk and psychedelic rock influences, GAUPA released their self-titled debut EP in June 2018 and have since made a name for themselves in the international underground rock scene. The “GAUPA” EP was well received and led to the band playing one of their first live performances at Scandinavia’s biggest rock festival, Sweden Rock. GAUPA then got a chance to release the EP on vinyl via German label Kozmik Artifactz in October 2019 and went on to playing a good number of shows and festivals. Critics were impressed not only by the studio recordings and their diverse & complex arrangements, but also by the level of intensity the band displayed live. In April 2020 GAUPA, which means "lynx" in Swedish dialect, followed up to release their first full length album, “Feberdröm,” gaining even more attention from both the underground scene as well as NUCLEAR BLAST RECORDS, who will release their next album in 2022. Photos by: Axel Odevik (live-photo) and Johanna Aspfors (bandphoto & header), George Grigoriadis Photography (Bandphoto "lupins") Booking (Scandinavia and Europe) YerryStetter@k2ours.com Other inquiries: contact@gaupaband.com