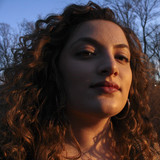 Elodie is an indie-folk guitarist and songwriter currently based in Boston, MA. She enrolled in Berklee College of Music to pursue her passion for playing guitar. At Berklee, she discovered her songwriting ability⁠— something she never thought she had. Once she realized her potential as a songwriter, Elodie’s artistic identity was finally solidified. With the support of her band, the True North, she hones a sound that pushes the boundary between indie-folk and rock. Her songwriting style is honest, reflective, and subtly melancholic. Since defining her vision as an independent artist, Elodie has continued to grow as a musician and songwriter, as well as a producer and arranger. She is pursuing a degree from Berklee with a double major in Guitar Performance and Contemporary Writing and Production. She is also taking a minor in Instrument Repair. Aside from writing and performing her own music, she provides acoustic guitar and backing vocals for Kilough. In her sophomore year at Berklee, Elodie teamed up with producer/engineer Zachary Munowitz (MMune) to release her debut single, “Higher than the Rain.” Her debut EP, "Things That Are Broken", was released on September 10, 2019.