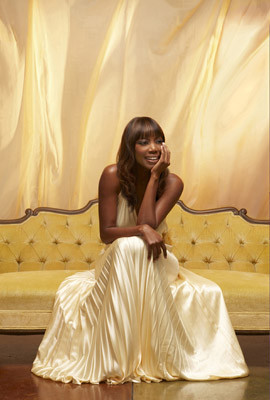 R&B vocalist Heather Headley was born in Trinidad in the mid-'70s. At an early age, this daughter of a pastor was surrounded by music and performance art. She started playing concert piano by the age of four, later immersing herself in the eclectic music of her culture: calypso, soca, and reggae. This foundation would later motivate Headley to sing professionally. Upon arriving in the States with her family at age 15, Headley quickly adapted to America's ways. She soaked up American music and worked with its complexities. She graduated with honors from high school, and later studied communications and musical theater at Northwestern University. In 1997, she was cast as Nala in the Broadway production of The Lion King. She was so impressive that Disney called on her shortly thereafter to audition for the Elton John/Tim Rice musical Aida. Headley accepted; her role as the Nubian princess Aida was captivating, and it earned her a Tony Award in 1998. Three years later, Headley moved from the stage to the studio to record her first album as a solo artist. She scored a deal with RCA and issued her debut, This Is Who I Am, in fall 2002. In My Mind was released in January 2006, and though it gave her more popularity than ever -- it peaked within the Top Ten of the Billboard 200 -- she followed it three years later with a contemporary gospel-oriented set, Audience of One, which featured original material alongside covers of the Commodores' "Jesus Is Love" and Fred Hammond's "Running Back to You." ~ MacKenzie Wilson