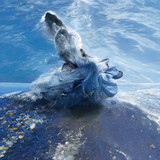 Namelessnumberheadman is a band that holds polar opposites together: Human voices with sound glitches. Real drums with drum machines. Concise songwriting with cinematic soundscapes. The organic with the synthetic. The ground with the stars. Originally from small-town Oklahoma, but now Kansas City-based with one member in Boston, the band's albums and live performances are part lab-experiment and part indie rock band. A half-dozen keyboards, electric guitar, sampler, and drums fill the stage. The room fills with immersive sonics interspersed with catchy, accessible melodies. The guitars and drums fade away and a piano softly thrums over a sampled drum beat with three plaintive voices soar over the top. In 2019 they released three instrumental albums of experimental sounds, beats, and ambience. When the shutdown of 2020 happened, the band took the opportunity to focus on recording and returned to the collection of pop songs and ambitious soundscapes that make up 2021's Plot the Points. The album furthers their work of combining melodic, impressionistic songcraft with epic, somber atmospherics. From the opening ascending prelude to the ambient, at-times hymnal finale, the band leads you on a journey with themes of hope and striving vs dread and resignation. But don’t allow yourself to be fooled by the dreaminess and space, there are some straight-ahead catchy pop songs in there.