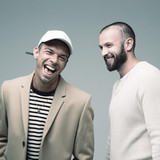 Sydney duo Spit Syndicate are one of Australia’s most exciting hip hop groups.  Nick Lupi and Jimmy Nice were born, raised and earned their stripes in Inner West Sydney; the community they’ve championed throughout their career. In 2008 and fresh out of high school, Spit Syndicate released their debut album ‘Towards The Light’ which earned them an ARIA nomination and the promise of big things to come. Ten years, five albums and countless tours later, Spit Syndicate have cemented themselves as one of Australia’s most respected and forward-thinking hip hop outfits. Boasting a highly engaged, cult fanbase, the charismatic duo are renowned for their explosive live show and constantly pushing boundaries, alongside regular collaborators Adit (Horrorshow) and Styalz Fuego (Peking Duk, Seth Sentry.) Together with Horrorshow, Joyride and Jackie Onassis, Spit Syndicate are founding members of the One Day collective, whose 2014 album ‘Mainline’ debuted at no. 2 on the ARIA charts and featured the singles 'Love Me Less', 'SDRO' and 'Leave Your Windows Open'.