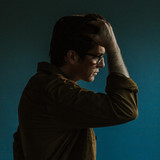 "Scott is a masterful performer, taking the upright bass to a totally new level. You're tricked into thinking most of the songs are an ensemble but with just Scott you get the rhythm, melody, percussion, and vocals... all layered perfectly together. He's the modern day 'One Man Band'." – Eric Marcum, WSM RADIO Scott describes the formation of his musical style, “I started music as a bass player, but when it came to singing and writing songs, all my favorite writers played guitar or piano, and I started writing there.

But while in Ricky Skaggs’ band, I was performing '20/20 Vision' in the show, which began with just the bass and my voice ... it was a revelation.