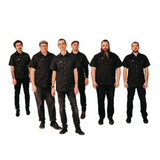 NOW CELEBRATING 25 YEARS OF SKA PUNK PARTY MAYHEM! That’s right. The Planet Smashers have somehow managed to survive a quarter century of worldwide touring, non-stop partying and extremely questionable life decisions. An absolute staple in the Canadian music scene, The Smashers have been slinging their two-toney, punky, new wavee party ska to the four corners of the earth with an unapologetic middle finger raised on one hand and a double mai-tai cocktail firmly gripped in the other. Too Much Information is The Planet Smashers’ ninth full-length album and adds another illustrious set of bangers to their 25 year legacy of unbelievably addictive songwriting and defiant debauchery. These fourteen songs run through a diverse collection of themes ranging from the culture of over-sharing (Too Much Information) to being obsessed by love (Can’t Stop) to eating far too much ice-cream (Brain Freeze) to that one time a couple years back when Matt Smasher broke his neck in four places after a show in Sherbrooke (Break My Neck A Love Song). One thing’s for damn sure, you just can’t keep a good band down. "The Smashers are in tip-top form, serving up sizzling platters of third-wave ska with a little punk thrown in for rebellion's sake" – Alternative Press