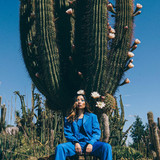 Australia's Dami Im is one of the most revered pop artists of the new millennium. The Australian singer-songwriter walked off The X Factor stage in 2013 victorious and strode, into the #1 spot on the ARIA charts with her platinum self-titled album Dami Im. Since then, she’s released three more acclaimed studio albums, flown to Sweden to represent Australia at The Eurovision Song Contest 2016—where she placed second in the world with her power ballad & international smash, ‘Sound of Silence ‘. management | www.mavenagency.com.au