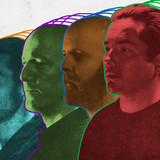 The Ramona Flowers formed in 2012 when Dave Betts (keys/guitar) met (singer) Steve Bird for the first time at a fancy dress party. The former was dressed as Freddie Mercury and the latter as a vacuum cleaner. Yes? and they recruited (drummer) Ed Gallimore after a girl Betts knew was stood up on a Tinder date by a “good-looking guy” who was also a professional drummer. The romance wasn’t to be, but Gallimore was soon drafted into the band’s line-up. This is all fact? What is certainly true is Betts, Sam James (guitar) and Wayne Jones (bass) met Bird and Gallimore and The Ramona Flowers were born... Having initially banded together in their shared search to find the sweet spot between rock and electronica, The Ramona Flowers have progressed through two albums – Dismantle And Rebuild (2014) and Part Time Spies (2016) – to their finely-honed third long-player, Strangers. Their most electronic and dancefloor-ready offering to date. For Strangers, The Ramona Flowers employed a new creative modus operandi of the collective members writing separately, using computers and synthesisers, before bringing the songs to the rest of the band in the studio to complete as a team. Hence the music’s more electronic focus. “These guys don’t pick up their guitars any more,” laughs Bird. “It wasn’t a conscious decision. It was just the way it naturally progressed. We’ve always been going that way.”