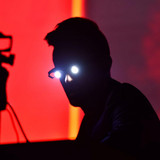 Few South African artists are as enduringly influential as Sibot. Whether as producer, DJ, composer, collaborator or solo artist, this Cape Town-based artist has played a pivotal role in the emergence of electronica as a real force on the national and international scene. Sibot’s critically acclaimed solo work is a masterclass in the possibilities offered when electronica is infused with hip-hop and other influences. His solo releases include In With The Old (2007), Throw Away (2012), Row Row (2013) and V.L.D.T (2016). Sibot’s exploration of different musical frontlines is an ongoing pursuit for an artist credited with helping cement South Africa’s nascent electronica scene nearly twenty years ago. He’s performed at most of the major electronic festivals in South Africa, and adding Sonar Barcelona and Monegros abroad. Constantly evolving ways to include visuals in his performances, Sibot’s ongoing collaboration with visual artist Toyota has resulted in the creation of a 3D universe during their signature Sibot x Toyota live shows, a much sought after experience that further cements him as a key player in SA Electronic music.