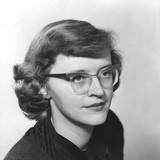 A mysterious and deeply fascinating figure, early folksinger/songwriter Connie Converse pursued her music in obscurity before vanishing completely from the face of the earth. Converse was born Elizabeth Eaton Converse in Laconia, New Hampshire in 1924. In her twenties she dropped out of college and landed in New York City, where she began writing and recording her own songs, often plaintively beautiful storytelling folk songs recorded in her small apartment or by friends. Over the next several years her only public appearance would be a chance performance in 1954 on television program The Morning Show with Walter Cronkite. After a decade or so of putting energy into a slow-to-materialize musical career, Converse left New York for Ann Arbor, Michigan, where her brother was teaching at the University of Michigan. She all but abandoned her musical interests, instead focusing on political activism and a job at local magazine The Journal of Conflict Resolution. She played music for friends at parties, but not much more besides that. In 1974, amid battles with depression and health issues, Converse left several goodbye notes, got into her Volkswagen, drove away, and was never heard from again. In January 2004, her music was offered a public resurgence when engineer Gene Deitch played a then 50-year-old recording of her song "One by One" when he guested on New York music historian David Garland's radio show Spinning on Air. The song caught the ears of Dan Dzula and David Herman, who were moved to meet with Deitch and go through his archive to assemble a collection of her never-released songs. This collection materialized in 2009 as How Sad, How Lovely, a collection of 17 songs taken from various recordings that friends, family, and other Converse associates had preserved over the years. Her music finally reaching a broader audience, her uniquely intelligent maverick songs began to have an influence on a newer generation of folk and indie artists. ~ Fred Thomas, Rovi