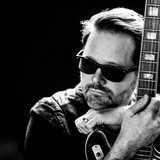 Music has always been in my heart and on my mind. When I was three years old, watching a Notre Dame football game with my father, I told him that I wanted to be the guy with the big furry hat leading the marching band instead of a star running back. I did play football in high school, but it was music that was a constant force in who I was and who I became. I am excited to release my second of three EP’s this year and a third on it’s way! Won’t Let Go follows the Here I Go Again EP with similar themes but raises the stakes. Adding to the acoustic nature of Here I Go Again, I put together a full band to bring the songs on Won’t Let Go to life. Getting a call to join John Fogerty’s band was one of the most incredible moments of my career. I not only got to share the stage with John, but some of the greatest musicians I’ve ever known including Kenny Aronoff, James Intveld, David Santos, and Bob Malone. And then having the chance to share a stage with Paul McCartney and perform on Letterman, Leno, and The View was something I could only dream about. And it came true. Currently, I am working on a musical (ten years in the making!). The show, Christmas Ain’t A Drag, will make its New York debut off Broadway in 2018! A fun filled show about four lives that intersect in a night club on Christmas Eve with original music inspired by the Brian Setzer Orchestra Christmas Show and other big band music of the era. I have been extremely fortunate as a solo artist to have shared the stage with The Lumineers, Robert Earl Keen, Jacob Dylan, Styx, The Temptations, Art Alexakis/Everclear, REO Speedwagon, and Don Felder (Eagles). A song I wrote, “Hey, Kansas City!”, for the city I call home was selected as the Touchdown Anthem for the Kansas City Chiefs during the 2015 season and still gets heard on radio and TV. -David