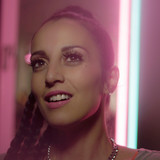 ASCAP Award-winning singer-songwriter Mayré Martínez's powerful voice has touched millions around the world. Her hit songs have taken over the radio, reality TV and telenovelas all over Latin America. She gained great popularity in her home country as a contestant on the reality singing competition Fama, Sudor y Lágrimas (RCTV), which she retired from to participate in the first season of Latin American Idol. She became a true national legend when she won the competition, taking the prize to Venezuela. Her love for her country has inspired many performances, as well as her song Mi Amada Venezuela Her debut single La Reina de la Noche became an anthem for the LGBT community, strong supporters of her work. Several of the songs from her homonymous debut album La Reina de la Noche have become the soundtrack of hit latin TV shows, such as Más Sabe el Diablo (Telemundo), Aurora (Telemundo), and Tabú Latinoamérica (Nat Geo LA)