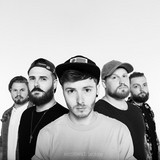 'When all we feel is hell, hell is all we see'. ' wars' are a five piece metalcore band from the UK, whose music tackles the conflicts we all find inside ourselves. From soaring melodious reflections on the existential, to the outright catharsis of chaos, wars use their music to confront, question, and extinguish the deepest demons. Their debut album 'We Are Islands, After All' released in 2017 on Spinefarm Records. After spending two years on the road, the band went back to into the studio to start their next phase. The following EP 'As Within /// So Without', released via A Wolf At Your Door Records, has had more than 1 million Spotify streams to date, and lead directly onto the 'A Hundred Shivers' Chapters in 2020. Three of the four 'Chapters' for the August 2021 record 'A Hundred Shivers' were released over the course of a pandemic-riddled, turbulent 2020. Now, with plenty of new music still to come as part of this encompassing record, and an emotional live set to return to, wars are charging inexorably onward.