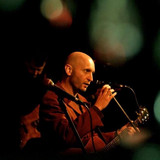 Dave Robertson sings about kissing, climate change, cult 70s novels and more kissing. His thoughtful, sometimes cheeky, lyrics are personal, political, playful and powerful. Influences range from story-teller singer/songwriters like Ani Difranco, Paul Kelly, Jason Isbell, Conor Oberst and Billy Bragg, to the atmospherics of bands such as The National and The Cure. The sonics of Dave’s band The Kiss List are diverse. You could place the word “indie” in front of folk, pop or rock and you’d be in the ball park depending on the song at hand. Their album Oil, Love & Oxygen was an epic DIY project recorded across ten houses. The most popular track Montreal is a bittersweet tale of romantic regret. The new single, Canary in the Coal Mine, resonates with our apocalyptic times and finds hope in the school strike for climate movement. Recording for this song began at Hopping Mouse Studios as part of an EP project, and was finished during lockdown in Dave’s home studio, with mastering by Grammy Award-winning engineer William Bowden. The band have an impressive gig history, especially in their home town of Fremantle, but Dave also has solo gig highlights that include the Nannup, Fairbridge and Fremantle festivals, supporting The Basics in Tasmania and performing the song Rogue State to thousands at a Walk Against Warming rally. Official website: https://www.daverobertson.com.au/ Newsletter signup: https://www.subscribepage.com/daverobertson