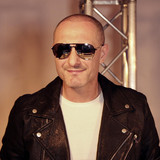 Tom WADE Shepherd – About the Artist Artist and producer Tom WADE Shepherd started to create electronic music, compose music and release albums in 1998. Making music, which started off as a hobby for him, has by now resulted in his releasing several songs and four successful albums. His most well-known album entitled God Created has sold over 1000 copies to date, and his album Apollo 11, created for the anniversary of landing on the Moon, was released in 2019 and successfully presented in the US as well. His latest album The Hungarian First Man commemorates the Hungarian astronaut Bertalan Farkas and the 40th anniversary of Hungarian space travel. The album is a historic one, it focuses on significant events and intends to describe the first Hungarian space flight. With his last song, the composer remembers those who lost their lives to space exploration and also the prodigal sons, whose father still expects them to return home. The track „Bedtime stories” also commemorates the excellent Hungarian tale writer and poet István Csukás (1936-2020). On the last two albums the events of conquering space, completing the missions, the vulnerability of human life and the experiences of the astronauts are all expressed in the language of progressive electronic music. Info: https://tomwadeshepherd.com; https://tomwade.hu; https://www.facebook.com/tomwadeshepherd