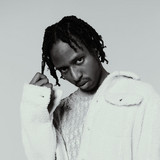 With a treasure trove of credits ranging from Jeremih, Ty Dolla $ign, A Boogie wit da Hoodie, Craig David, Stefflon Don, and K-Pop favorites SuperM, U.K. upstart Ebenezer struck gold early on in his career as a prolific songwriter and producer. His penchant for sticky hooks slithered its way to his debut EP, 2018's Bad Romantic , where highlights were abundant, including the summery intro "South of France" and the swaggering anthem "Stats." His magnetic confidence and indomitable work ethic have allowed him to zoom up music's hierarchy, especially after his smoldering follow-up effort 53 Sundays and his latest masterpiece, 2020 EP Bad Romantic II . For the latter, the U.K.'s swiss army knife puts on an exhilarating one-person exhibition, flexing his hip-hop and R&B muscles on the six-track project, as he rapped, sung, wrote, produced, and mixed the mini collection all by himself. Whether he's playing the petty lothario on "3am in London" or savoring his muse's imperfections on "Flaws and All," Ebenezer cunningly tap dances his way through the hearts and ears of his fans with enthusiasm. Since the start of quarantine in March, the multifaceted star has provided fans a sneak peek into his studio endeavors on Instagram Live. His weekly "Quarantine Sessions" showcases his exponential growth as an artist, songwriter, and producer, as he waits to release his upcoming four-track EP, Bad Romantic 2.5 .