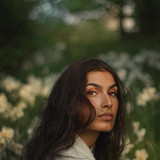 Shadi G is a Swedish songwriter, producer and singer whose soulful voice and unique RnB/Soul sound is striking the attention of some of Swedens biggest music magazines. Being schooled in classical music from a young age, growing up with music all from jazz, RnB, soul, hip hop to Persian music, where she has her roots, Shadi is crossing borders with her own soulful sound, both in style and language. Straight after high school she went off to London to learn music production and in 2016 she released her debut single “Lost”, which got her on to some of Swedens biggest playlists. In 2017 she started her own record label, Goldamin Records, from which the second single “Where We Go”, was released. From the label followed her first EP "No Fear" and singles such as “SPACE” and “Goddess pt. 1”. Following this she is releasing a new series of EP:s with the title Conversations. With the first one coming out in June 2021. A new artist but already carving out a clear space in her field, and as stated by Soundlooks Magazine - “Discussions are quietly surfacing about whether Shadi G may become an important face of contemporary R&B”.