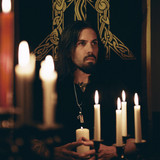 Wolcensmen began its journey in 2013 with the release of a 3-song demo CD. It was initially intended to be a small creative outlet for the man behind the project, Dan Capp. He had played in a number of metal bands with varying styles, but looked back to his teenage years when he had crafted short acoustic passages of music inspired by the likes of Ulver, Opeth, Empyrium and Wongraven. These long-lost cassette recordings had been praised by friends at the time, so he decided it was time to rekindle that old flame. The growing popularity of the demo demanded a debut full-length, and with the encouragement of the label Deivlforst, work began on this and culminated in the release of ‘Songs from the Fyrgen’ in Nov 2016. The reception to the debut album was phenomenal and despite no structured press campaign the initial CD pressing sold out in six months, with overwhelming praise from the underground press. The inspiration for Wolcensmen was always, quite simply, those deeply atmospheric acoustic-guitar compositions which occasionally flowed from within the extreme metal scene of the 1990s. Wolcensmen’s purpose is to draw upon those folkloric moods and aesthetics and to explore the mystical Heathen culture of North-Western Europe. Later, Wolcensmen signed with the label Indie Recordings, who reissued ‘Songs from the Fyrgen’ in with several new songs and a cover of Bathory’s ‘Man of Iron’ included as a bonus EP under the title of ‘Songs from the Mere’.