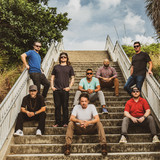 Nearly two decades ago, SOJA began as high school friends in a D.C. area basement teaching each other to be musicians and play roots reggae music. Today, the 2x GRAMMY-nominated band, with over 7 million online followers and over 300 million Youtube views, headlines concerts all over the world for their massive dedicated fanbase. Averaging around 120 shows a year for the last decade, SOJA has toured with acts that include Dave Matthews Band, 311 and Incubus, and engaged die-hard followers at festivals worldwide. Their live shows offer people a chance to look both inward and outward, and feel part of a global community, particularly since SOJA has headlined shows in over 30 countries. Even with this passing of time and yearly advances in the band’s success, SOJA always wants to remember their time together in that basement where they initially connected, inspired by each other’s contributions and ideas. The feeling of true magic, collaboration and brotherhood that started in the basement is still evident today in their music and on full display each night at their live concerts. For their latest studio album, Poetry In Motion (Oct 2017), it was essential to SOJA to consciously go back to the beginning and recapture that same sincere, cooperative magic sparked 20 years ago. SOJA is: Jacob Hemphill…Vocals/Guitar Bobby Lee…Bass Ryan Berty…Drums Patrick O'Shea…Keyboards Ken Brownell…Percussion Hellman Escorcia…Saxophone Rafael Rodriguez…Trumpet Trevor Young…Guitar/Vocals