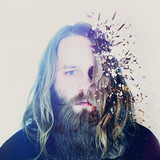 The kind of music dead people dance to. Haunting synths, droning, fuzzed out guitars, beats ‘n’ bass. TJ Webb is bringing you electronic infused rock and industrial sounds for less than the price of a cup of coffee a day. After years of playing in garage rock bands in rural Nova Scotia, remixing for artists around the globe, and some moderate success with his And All That Were Left Were Monsters solo project, TJ’s dropped the pseudonyms and honed his creative energy into a laser beam pointing square at a new sound that is a direct reflection of himself. A sonic wall that still lets nuances and subtleties through, it’s not guitar music, it’s not dance music, it’s something else. Borrowing elements from genres such as industrial, rock, hip-hop and electronic music but also discarding genre rules, TJ’s sound is familiar yet different. For fans of: Nine Inch Nails, KMFDM, Skinny Puppy, Static-X