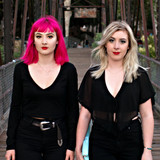 Compared with bands like The Go-Go's, The Ramones, The White Stripes, and The Runaways, Dog Party establishes their own unique west coast sound with a dash of punk and a sprinkle of pop. With 6 records and extensive touring under their belts, Dog Party has been active since 2007.