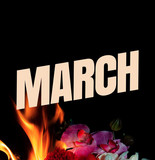 March is a Dutch/Belgian punkrock quartet.   Initially formed as a trio in 2013, MARCH quickly and steadily built a reputation for working hard, playing hard and not looking back. After the release In the Air (EP, 2014), 2016 saw the critically acclaimed release of debut album Stay Put on White Russian Records. Since, MARCH has continued to grow an underground following while intensively touring The Netherlands, Belgium and their neighbouring countries. In 2019, the band lifted the veil off their sophomore album by releasing the singles Fear Of Roses & Nothing Ever Really Dies.