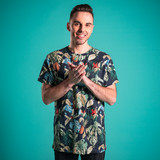 From a very young age Greg was very passionate and fascinated by music. At the age of 11 he got introduced into producing and deejaying. His enthusiasm and energy in every set, isn’t something you don’t see very often. He discovered that he has a talent to make every dancefloor vibe to his rhythms &sounds which he calls ‘Extraordinary Futuristic Music’. This grabbed the attention from one of the big guys: Lost Frequencies who signed his single ‘What They Want’ on his own imprint ‘Found Frequencies’ in 2019. Later that year he also signed an exclusive publishing deal with the label. The single got supported by renowned deejays like David Guetta, Oliver Heldens, Fedde Le Grand, Lost Frequencies, Don Diablo, Dannic and many more. Nevertheless Greg is a hard working producer who loves to do things different and blend the uniqueness in every track and deejay set. This young guy can already put quite some references under his name. But future lies ahead with definitely more the come from Greg Dela. Greg Dela is on the road to become a very influential artist in the near future. Contact: Info & management: mgmt@undercurrent.be Bookings worldwide: hello@crossover-agency.com Promo/Demo: promo@gregdela.com