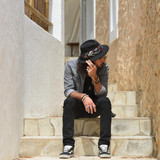 Jon Tessier is somewhat of a journeyman. Born in Brazil and raised in Malaysia, the dual national currently splits his time between Paris and Ibiza. In the age of the digital nomads and lifelong backpackers, Tessier is an artist who’s been there and done that all before.Having played guitar in bands since his teenage years before electing to go it solo, Tessier released his first single, the album opener ‘Like the Sun’ in 2017. The five-track Slice of Paradise EP followed the next year, the positive reception to which paved the way for further singles. Tessier’s debut full-length, Skull Flower arrived this April, combining the prior releases and adding a number of new songs to his growing repertoire. Produced and mastered by Henry Sarmiento of Ibiza’s Sonic Vista Studios, ‘Skull Flower’ is well polished and put together. This a record we will definitely be spinning(...). [indie berlin blog]