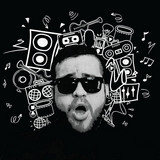 Conscious lyrics, intricate sound, and seasoned experience on stage are what separate Milton J from your average MC. Milton J is an Alternative Rock and Hip-hop artist born in Arcadia, CA but has spent most of his adult life in Frederick, MD. He sings, raps, plays the guitar, produces/records his own tracks, edits his own videos, and consistently pushes more music to his fans. PERSONAL TESTAMENT "The music hit me hard at a young age. I honestly couldn't remember wanting to do anything else. I recall my mother blasting Ricky Martin while I sang the lyrics on top of the kitchen table like it was a stage. I grew up in northern California with my Ecuadorian Mother, American Father, brother, sister, and many foster siblings. I moved to the east coast in a small city called Frederick, MD when I was 10, where I grew up. The diversity and unique experiences in my roots played a big part in shaping my music and who I am today.I fell in love with Hip-Hop in Frederick and joined the Baltimore scene when I was 16."