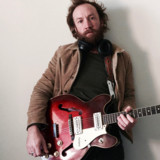 From the stark confession of lively openers ‘One Foot Out The Door’ and ‘Angel At Your Back’s reflections of ‘Waiting For My Man’, to the sheer intimacy of ‘Outsider Blues’ or ‘Just For An Hour’,

McMahon brings a quiet yet commanding authority on his latest LP ‘You Will Know When You’re There’ Amid wry and poignant observational lyricism lies the utter timbre of McMahon’s voice; a gentle ache that coaxes delicate, earworm-like melodies in a way that is wholly believable and moving. Uncluttered and focused in its arrangement, this is a confident record that ebbs and flows lightly, yet displays immense character and weight with each pressing moment. “The depth and sophistication of McMahon’s songwriting is really what comes to the fore on this record” - Rhythms magazine With a string of independent releases to his name and over a decade of non stop writing, recording and performing, Sean McMahon has honed an undeniably genuine voice as a singer/songwriter, with a poetic, melodic style that weaves vivid story telling, confessional narratives and abstract musings through timeless sounds inspired by classic 70's rock, folk and cosmic country.