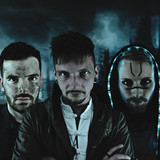 Asinis is a 5-piece concept band from germany. The band can be classified into the area of straight and melodic metalcore in classical style. However, the focus is not only on the music. Asinis live a story that takes its beginning on a fictional planet called Gaia. Members of the band become avatars, lyrics include chapters and music videos become short films. With Asinis you dive into a unique and mystical world, which is strongly characterized by fantasy and science fiction. Even though the topics of the songs have their origin in the world of Gaia, most of them can be projected onto the world on earth. So the audience can recognize themselves in the songs or at least discover familiar situations. Asinis bring Gaia’s world to the stages and invite the audience to be a part of this story. The project was brought to life in October 2018. In April 2019 the first official single “The Birth” was released. Due to a loyal fanbase and the engagement, enormous successes could be achieved quickly. This also applied to the second single “My Child”, which was released in June 2019. In the same month, the band performed on stage for the first time as headliner in a new formation and received comprehensive positive feedback from the audience and the organizers. On May 15th, 2020 Asinis released the single “Victor” and announced their cooperation with the label Seek & Strike. With this partner the next big milestone took place, the release of the first EP “Roots” on 19th June 2020.